A Rollercoaster Ride for Software Markets

It has been a disconcerting journey through the first three quarters of 2022. We ended 2021 having survived another year of the pandemic, with equity markets at or near all-time highs, interest rates near historic lows, and technology M&A activity at record levels. 2022 has seen rising inflation and interest rates, twin global disruptions in Ukraine (invasion) and China (shutdowns), and an overall economic slowdown. The return of a “risk off” mindset, combined with increasing discount rates, impacted software M&A and the NASDAQ even more than the wider market. After ending the 2nd quarter down nearly 30%, the NASDAQ had bounced back to a “mere” 16% decline in mid-August, only to retrace and surpass the earlier lows at the end of September. As public market valuations fell, SPACs evaporated and other buyers began to reevaluate the need to pay nose-bleed multiples. This has led to a significant drop in software M&A, with each consecutive quarter showing a decline from the last.

In Q3, the pattern we’ve continued to see is fairly typical of a market reset – bifurcation. The first area of bifurcation is between the large cap and middle market Tech M&A markets. Big Tech, is often much more susceptible to broader economic swoons and who may rely more heavily on debt for acquisitions, has seen a significant slowdown so far this year in deals over $1 billion in size, with only 15 in the third quarter. However, deal activity in the mid-market and growth market continues to be solid, at least among the highest-quality companies (i.e. – leading positions in growing markets, clear Rule of 40+, achieved critical mass or younger with high growth rates).

These top-tier companies are still receiving multiples at, or near, the levels we saw six to twelve months ago. However, valuations for even these companies may eventually contract, either in sympathy with the public markets or simply because of decreasing growth and profitability. So far it appears that buyers and sellers still want to transact, and the traditional glut of post-Labor Day deals has been well received despite continued hawkishness from the Fed. So much for the top decile; the “average” software company is quite likely to see demand settle out at valuations anywhere from slightly to somewhat meaningfully lower than 2021. That said, valuations are still historically strong. Buyers and sellers are both at risk of over-caution, with buyers missing out on high-quality assets and sellers forever regretting selling too early rather than too late.

This bifurcation suggests several potential strategies for software and tech-enabled services businesses, as well as for the investor community. First and foremost, at the risk of being perceived (rightly) as investment bankers only too eager to push companies into market, high-quality companies who have not sought to take money off the table in the last several years should consider whether to continue to wait is a sustainable strategy. As noted above, multiples for these companies have perhaps declined by few turns of revenue from the highs of 2022, but they remain robust relative to historical averages. If the market decline continues, and if capital continues to become more expensive, the receding tide will sink all boats. The most confident management teams will sleep better at night after taking some money off the table. 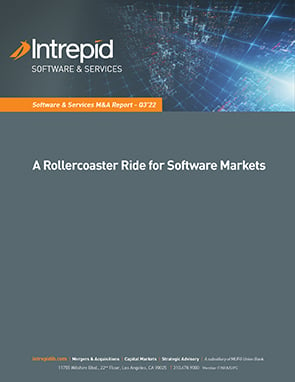 The counterpart to this, for investors, suggests that minority and slight majority deals may become relatively more important in the current environment. Attempting to overcome buyout resistance may not be fruitful, but approaching the market with a “have your cake and eat it too” offering could enable investors to take meaningful positions in technology leaders who may not otherwise be available. Given the amount of capital still sloshing around, putting the capital to work in a way that keeps LPs happy should be an efficient use of time for the middle market investor. Similarly, mid-sized funds that need to realize a print to raise the next fund / keep LPs off their backs / sleep through the night would do well to consider selling a portion of their position to a larger fund. This sentiment was repeated on our recent trip to New York and Chicago, and we believe in it. An interesting and related opportunity has also emerged for investors taking secondary positions in private equity and growth equity from LPs who may need liquidity – perhaps to invest in the next fund, perhaps to make up for shortfalls in other strategies.

Now for the B grade companies, we anticipate that successful businesses that do not qualify under the top tier rubric may still have reason to raise primary capital and/or take liquidity. On the primary side, the standard advice to seek capital before you need it has never been more true. B companies that have the opportunity to take advantage of opportunities by investing in sales or development (or buying weaker competitors) will regret failing to seize the moment. Still, capital has become more expensive. The traditional remedy is going to come back into fashion: structure.

We are guilty of hypocrisy to an extent in conceding that structure can indeed bridge gaps in valuation. In the current circumstances, particularly when days must be seized, negotiate for the best terms (low coupons, participation that diminishes with growth, etc.) and seize away. Similarly, for capital providers, structure can protect on the downside – with the caveat that nobody wants a miserable partner who takes money they later regret.
For C companies, there may be no alternative to a down round. It is better than bankruptcy, live to fight another day, etc. For those investors who dare to fight through board dynamics, we salute you.