The Commercial & Consumer Technology sectors tracked by Intrepid got off to a healthy start in the first half of 2019. M&A activity continues to flourish, driven by several trends including continued growth in live event production and investment in the supporting ecosystem; the ongoing consolidation of the residential and commercial A/V integration sectors; and a strong interest in content creation and gaming. 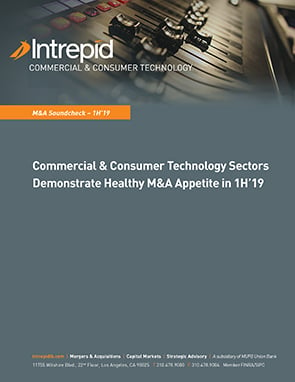 Among the more notable deals in 2019 was the acquisition of Control4 by Snap AV, which has been on an acquisition spree since being acquired by Hellman & Friedman in 2017, expanding both its product capabilities as well as its brick and mortar distribution footprint. Also notable was the emergence of Guitar Center into the integration market, most recently with the acquisition of Chicago-based TVTI. We are seeing significant M&A and consolidation across the CEDIA world as manufacturers and distributors pair up to build scale in an increasingly competitive market.

On the live event side, the growing number of concerts, music festivals, and experiential marketing events is driving strong growth among industry constituents. Not surprisingly, this growth is also contributing to meaningful M&A as companies expand their capability set, add products, or broaden their geographic reach. The ability to deliver incremental value to customers appears to be a recurring theme among the many sector deals noted below.

Finally, as we have seen in our own transaction selling Blue Microphones to Logitech last year, investor appetite for companies that touch the content creation, gaming and game streaming markets is alive and well. Turtle Beach acquiring German accessory maker ROCCAT in March is a good example, and we continue to hear of companies setting their sights on the gaming peripheral market as consumers become prosumers and eventually professional gamers. The launch of a new generation of consoles and the growing popularity of e-sports, complemented by a consumer base willing to invest in their gaming rigs, should boost this industry further and lead to an active M&A market in the rest of 2019.